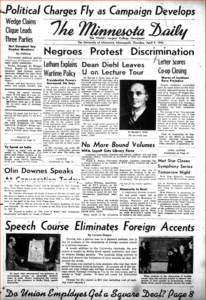 African American students published an “Open Letter to the Gentlemen in the Administration” in the Minnesota Daily.

In this episode Jim Groom talks with professor Riv-Ellen Prell and artist Livia Foldes about their collaborative project A Campus Divided: Progressives, Anticommunists, Racism, and Antisemitism at the University of Minnesota, 1930-1942. This website was born alongside a physical exhibit highlighting a history of surveillance and segregation at the university that spanned more than a decade which was un-earthed by the research of Sarah Atwood,  then a Ph.D. candidate in American Studies. The physical exhibit was immensely popular, but also underscored ongoing struggles and tensions not only at UMN, but across the US political landscape more generally.

The exhibit coincided with the early days of the Trump presidency’s racist and anti-Semitic dog whistling, in particular the “Unite the Right” rally on the University of Virginia’s campus in August 2017. That is the context for this historical deep-dive into campus-specific racist, anti-semitic, and anticommunist rhetoric in the 1930s, a powerful moment wherein the struggle between the university administration and student activists in the 1930s might provide one way of understanding the contemporary national political stage as the exhibit opened.

This was the push by Prell and Foldes to not stop at a limited-run physical exhibit to highlight this history, but also digitize these documents and design a home for them online that would not only make this archive readily available, but through a powerful design highlight the urgency and importance of activism when faced with the abuse of power. Watch the entire interview to get a sense of this truly important academic and design work that these scholar/artist/activists have made openly available to not only understand the past, but help put our present moment into that much sharper focus.